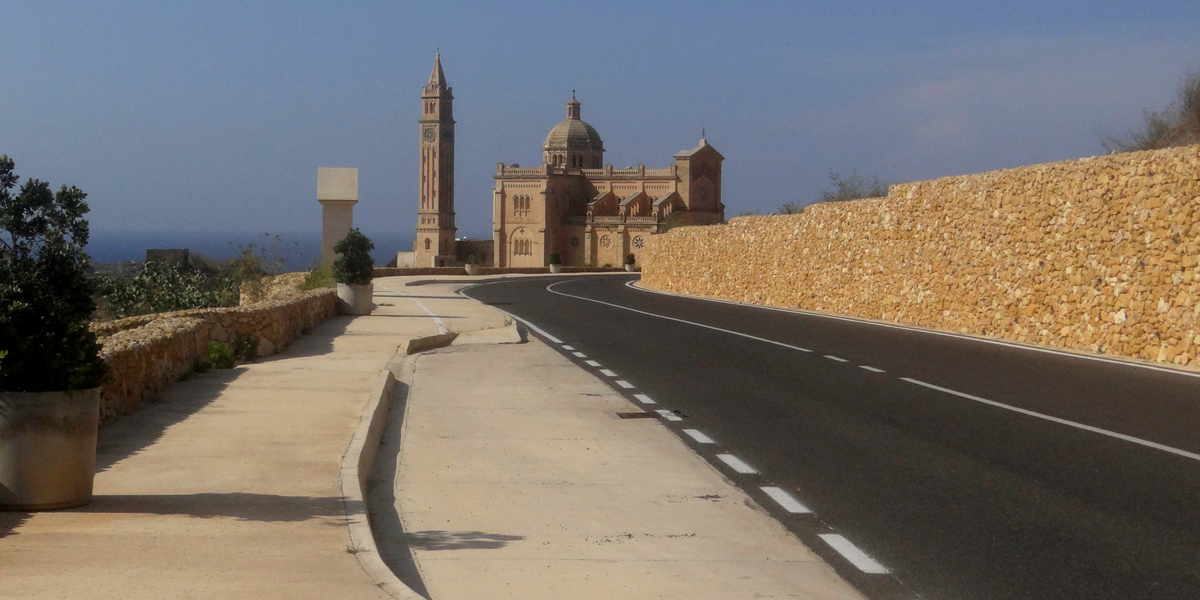 Nothing happens without reason

Although I found myself on Malta by chance, being on Gozo wasn’t incidental. It was one of the moments I was already anticipating. Sometimes on our path we meet people and find out their life story. We meet people who were close to someone  we knew in the past and that in turn brings us closer to them. Without going into details, I had made contact with Nikolay over a year ago, but on Gozo we finally met for the first time. Although our paths had initially crossed through sorrowful circumstances, the meeting was a beginning of something really positive. 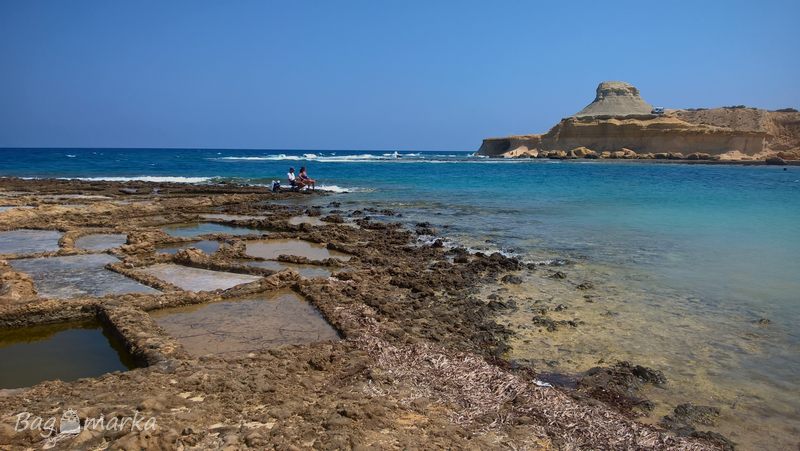 Get up 6 am. An hour on the local coach to Cirkewwa, then 25 more minutes on the ferry to reach Gozo. We have arranged to meet at 9.30 in the port. Some of my friends had asked to join me but I told them that I already had plans. It takes me 15 minutes to get to the bus stop. The neighborhood doesn’t strike me as pleasant. The valley I need to cross to get to the main bus station seems to be uninhabited, with a few houses scattered around. I only pass a few houses on my way. There is no living soul in sight. I begin to wonder what my evening journey back will look like.

The bus is virtually empty, but at the second bus stop I get a pleasant surprise when two of my colleagues from the Institute get on. We spend the journey in a jovial mood, they tell me a funny tale! If I was going to spend the rest of the day with them I would probably die laughing.My colleague from the Institute, Veronica, was a bit miffed that she couldn’t come with me to Gozo, but I promised her that I’d take some photos of the island and of  Nikolay.

On the ferry we decide to play a joke on Veronica. Sylvester and I take a selfie and send it to her. At first, she thinks that it’s Nikolay – my friend from Gozo – but shortly after she recognizes Sylvester, our mutual friend from the Institute. We were having such a laugh confusing Veronica. Of course, the next day Veronica would ask what I was really doing on Gozo with Sylvester. What else could I answer? It was an, unintended encounter.

We reach Mgarr. I’m leaving the ferry terminal scanning and searching the crowd for the familiar face of Nikolay. It doesn’t take long to locate him. We welcome each other like old friends. I feel like we’ve known each other for years. It very quickly appears that the bus which was going to take us to Marsalforn is overloaded with tourists. We opt for another bus for Victoria and one more change which will take us much longer, but we are not in any rush. Sylvester and Jacek join us for this journey to the capital. I don’t have to think which bus to hop on to, where to change, or how to get there. Although Nikolay has been living on Gozo for only a couple of months, he knows the place like a local. In Victoria we say goodbye to the lads and spend the rest of the day with Nikolay. We share our stories and memories, after all that’s why I’ve come here.

The three top places on Gozo

Before I arrived in Gozo I prepared a list of places I wanted to see. Gozo is a small island which can be explored in a day. From the shortlist of four I manage to see three.

The salt flats are a nice surprise – no tourists! These are the kind of places I seek on my adventures.The foundations of the salt flats go back to Roman times. The salt is produced in three stages; the salt pans are flooded with sea water; the heat of the all year sun here makes the water evaporate quickly, leaving the salt on the bottom of the pans; the salt is then collected and used in the food industry.The tradition of harvesting the pure salt from the salt flat has been carried across the generations. 24 liters of sea water yield 1kg of salt. 300 salt pans yield 3 tons of salt. 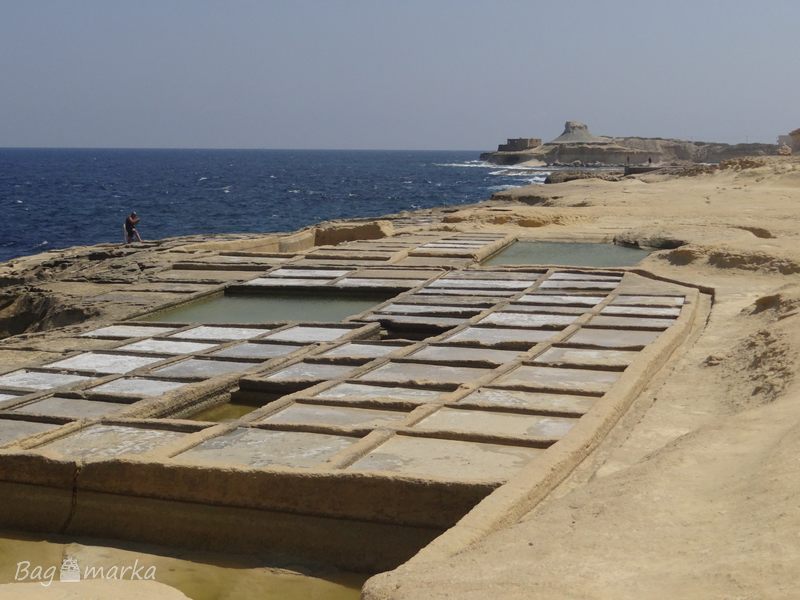 We take another bus to Xwejni. From there we head towards the Bay and moving alongside the coast we see the salt pans. It’s almost noon and the sun blinds us, but the warm sea breeze makes the heat more bearable than on Malta. 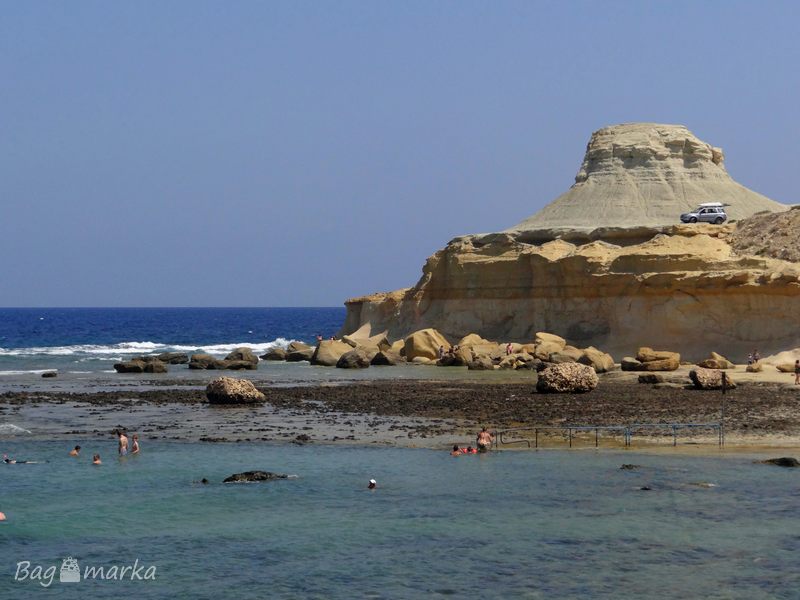 Next, we take a bus to a place which was the iconic symbol of Malta, the Azure Window. The view here is very different to the salt flats. I have an impression like I’m on the moon. The rocks are sharp and jagged, forming grooves with irregular outlines. In some places you can see the fossils and ubiquitous salt from the sea waves. It’s such a shame that the Azure Window collapsed. The landscape of the island has been intrinsically altered and it’s no longer the place we remember from postcards. Nevertheless, it’s worth a trip to take in a different view of the island, despite the masses of tourists who come to see the absent Azure Window, being drawn here only through a sentiment.

The last place that I really wanted to visit is the Basilica of the Blessed Virgin of Ta’Pinu – a sacred place and a shrine that is incredibly important to the Maltese people. Despite having read about this place in the past, I didn’t know that our pope John Paul II visited the Ta’Pinu.

Thousands of pilgrims from all over the world come here to ask the blessed Virgin Mary to heal us. It all begun in 1886 when the woman from the village heard the voice of Our Lady coming from the image of the Blessed Mary. Since then more and more believers started coming to the chapel, where their prayers were heard, and answered with many miracles. In 1920 on the site of the chapel was extended and the current Basilica of the Blessed Virgin of Ta’Pinu erected. 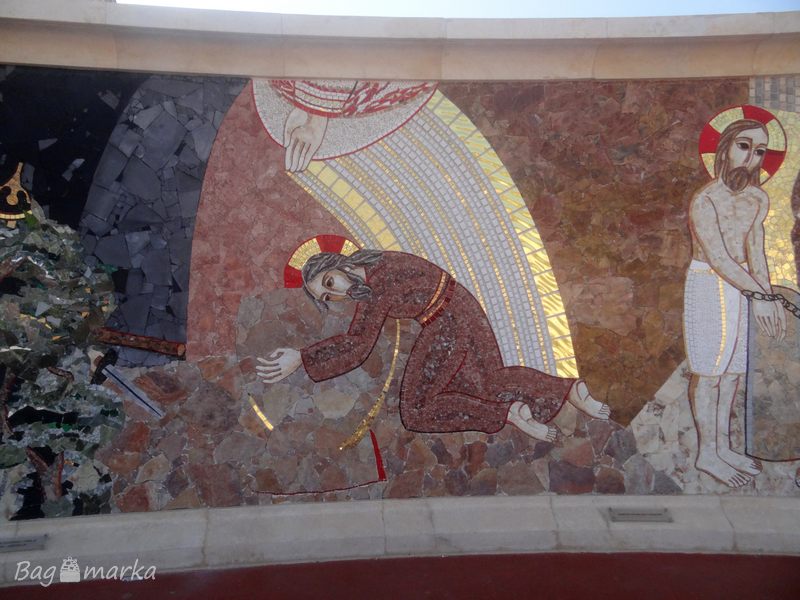 I saw what I came to see, an incredible and very peaceful place. An antithesis of typical shrines filled up with thousands of pilgrims. I was so glad I wasn’t disappointed.I also found out that this holy place is a very special place for Nikolay, who often comes here to clear his mind and also to keep fit.

Therefore, to keep ourselves fit we decide to take a walk from Ta’Pinu straight to Victoria, which is about 2,5Km. I’m guessing that the distance might be a bit longer, possibly around 3Km, but Nikolay tries to convince me that it’s an illusion. He proves to be right. 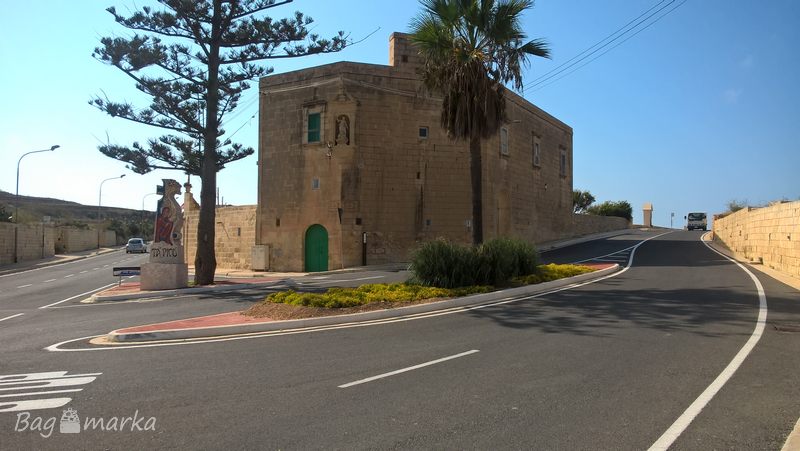 The trip to Gozo has been filled with our cordial meeting, chats, unhurried sightseeing, spending time in local cafes, and tasting local delicacies in picturesque surroundings. Without haste, I could enjoy the scenic but raw landscape of the island. Gozo is significantly different from Malta. As you travel more towards the centre of the island the crowds of tourists disperse and vanish, and eventually you are under an impression that you are in the middle of nowhere. Two weeks on Malta in the summer season means fighting for your seat on overcrowded buses, elbows pushing through the hordes of tourists in an unbearable heat.

Here on Gozo, at last I can catch my breath, and after the two long weeks on Malta I can finally recharge my batteries. The energy of this beautiful island flows through me, so I can come prepared for the upcoming weeks of hard work. I do hope that one day I can return here. There are so many more places I want to explore here in such great company.

Hello Malta Why Malta? The Maltese archipelago has always been on my list, but this time the sheer coincidence has made me fly to Malta. I’ve got an op...